Many may have heard the term.  Some may even be actively doing it.  But the big question is what exactly is split testing?

Today we are going to take a look at the definition of split testing and take a look at how to apply it to your digital efforts to achieve better results.

What Is Split Testing And Why Is It Important?

If we were to look at a formal definition…  Split testing (also referred to as A/B testing or multivariate testing) is a method of conducting controlled, randomized experiments with the goal of improving a website metric, such as clicks, engagement, form completions, or purchases.

Before we get into the details of split testing we must first clarify something.  Split testing is generally lumped into terms like Conversion Rate Optimization.

When actually, split testing is only part of the overall optimization process.  It is the actionable steps needed to prove hypotheses and obtain a measurable result.

There are generally two types of split testing, multivariate and A/B, let’s look at those in more detail.

This form of split testing is generally the measurement of two unique pages against each other, which each is given an even split in the amount of traffic to each variation. 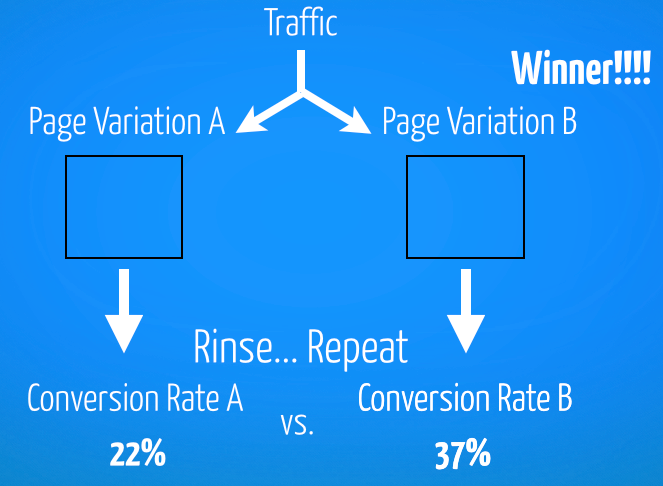 It is generally the measurement of two unique pages which could differ in many different ways either by complete page design and copy or just slight variations such as changing a headline or an image.

With A/B split testing you are trying to typically measure just one change.  You can also split it out to A/B/C type testing if the amount of traffic supports having more than 2 variations.

There are many different elements you can use A/B testing to actually test.  This is our preferred choice as we have more control and can do more with lower volumes of traffic.

To find out more about how much traffic is enough, check out our article here.

There has been much debate about whether multivariate testing is an effective method.  Generally speaking, we prefer A/B split testing methods as we have more control and can do more with less traffic.

Basically, it means that you can have 10 headlines, 10 images, 10 calls-to-action, 10 buttons, etc. and the test platform will run through all the combinations of each to find an ultimate winning combination.

If you have sufficient traffic, multivariate may be a good choice, it’s just not our first choice.

No matter the method of split testing you choose, it is a vitally important part of your digital marketing efforts for that it is the only true way to measure the effectiveness of site changes and how it impacts your desired goals.

There you have it, a brief look at exactly what split testing is, how it is important, and a couple of different methods to apply the principles.