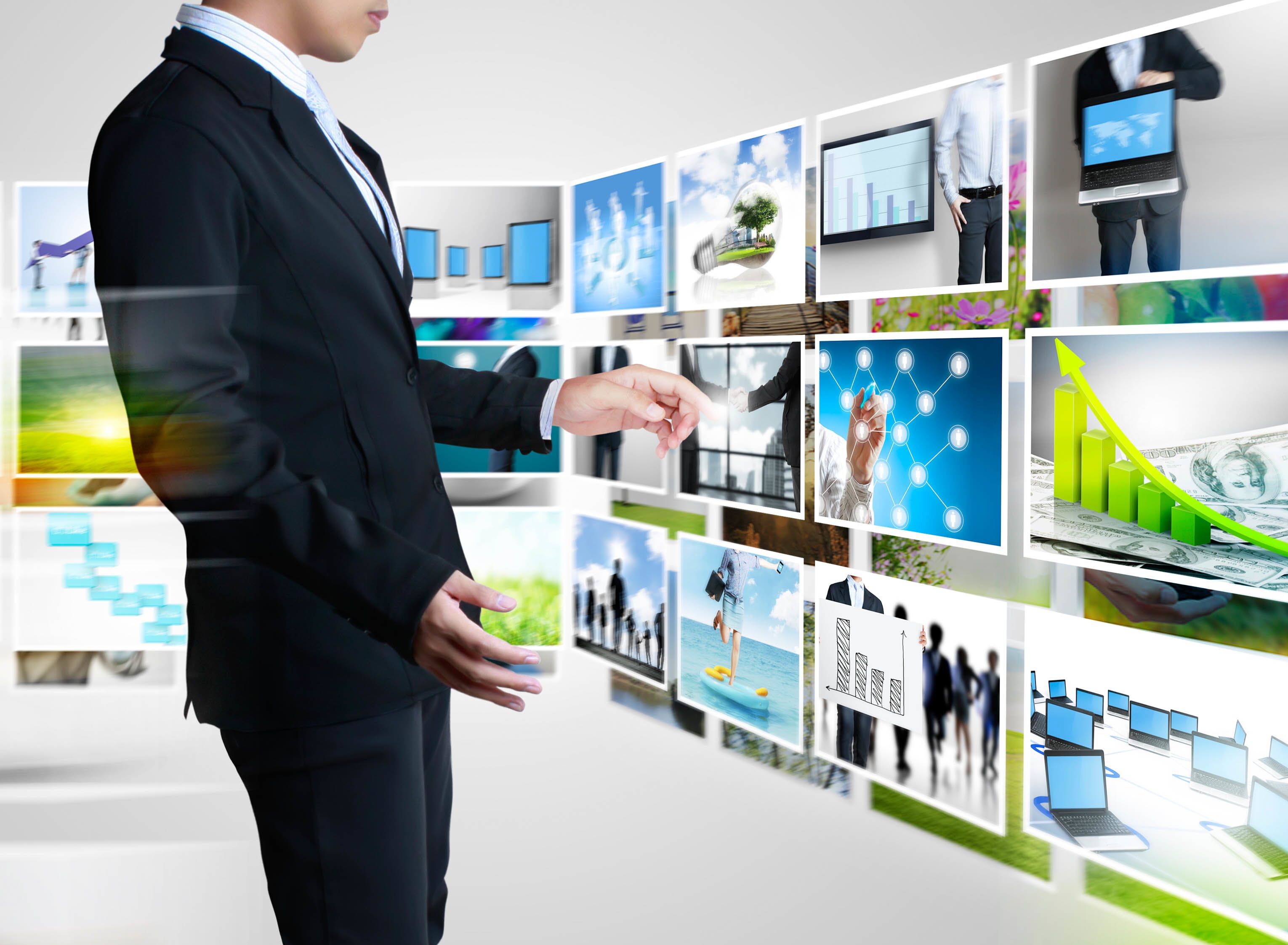 While browsing online, you’ve likely encountered your fair share of image sliders, which are also known as carousels or rotating offers. And you may enjoy viewing them—many people do. But putting aside the “cool” factor, image sliders can actually harm your conversion rates.

There are some CRO best-practice tips that are subjective or vary case by case. But overall, the consensus is that using image sliders is not a good idea. As appealing as some people may find them, the evidence against image sliders is compelling. “There’s literally not one study that I’ve found that says sliders are a good idea,” says Thijs de Valk of Yoast.
Check out the facts about image sliders below, as compiled by Thijs de Valk:

Why Image Sliders Aren’t Effective With Most Users

There are three main reasons.

This is a survival instinct. A sudden change or movement could be an imminent threat. And since we humans generally like to be aware of this type of thing in order to, ya know, not die, our eyes instinctively flick towards movement. 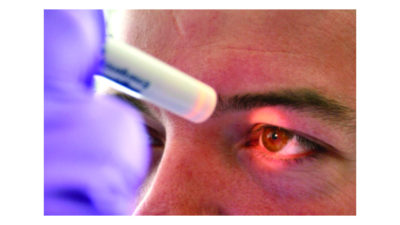 And while this may seem like a good thing (you would want people to look at your slider, after all), if your slider is in constant motion, people have a harder time focusing on the rest of your website where your value proposition, product details, and call-to-action may be found.

While their eyes may be drawn to them, most people don’t actually pay attention to the content of image sliders. And as previously mentioned, only 1% of people click on the slides and they generally click only the first slide.

Image sliders often move too fast for people to fully digest the content on each slide (that is, even if they wanted to understand the message). According to Peep Laja of ConversionXL, “Focusing on a single primary message and action is way always far more effective.”

Banner blindness occurs when web visitors either consciously or unconsciously ignore information that resembles a banner or other form of advertisement. And since image sliders can look similar to banners, people often turn a blind eye to them. 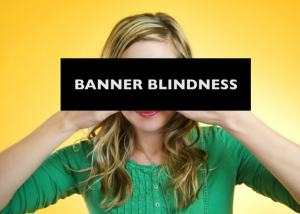 In general, it’s to your advantage not to use an image slider, but if you really, really want to…

1. Make sure you genuinely need to use one and keep the slides to a minimum.
Every single piece of information does not need to be on your homepage. Therefore, you need to take an honest look at your content strategy and decide what information is truly deserving. 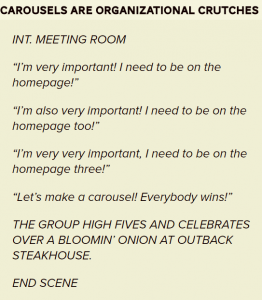 Making cuts can hurt, but it’s in your business’s best interest to do so.

2. The content should be relevant and flow in a logical, coherent order.

This may seem obvious, but it’s always beneficial to have an impartial person look at your slider to see if it can be easily understood.

3. Communicate how to navigate your slider clearly.

Make sure it’s apparent that your image slider is, in fact, an image slider that’s interactive. We’re talking arrows and clear ‘Previous’ and ‘Next’ buttons, as in the example below from Yahoo. 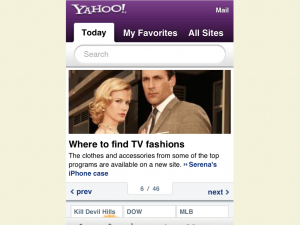 Don’t let visitors think your image slider is all your site has to offer. Use visual cues, such as arrows and scroll bars, to alert visitors that there is more to see off-screen.

What are your thoughts about image sliders? Do you use them on your website?

Previous Post How To Create The Best Value Proposition For Your Business
Next Post Discover Your Website’s Most Popular Pages And How To Fully Optimize Them
We use cookies on our website to give you the most relevant experience by remembering your preferences and repeat visits. By clicking “Accept”, you consent to the use of ALL the cookies.
Do not sell my personal information.
Cookie SettingsAccept
Manage consent

This website uses cookies to improve your experience while you navigate through the website. Out of these, the cookies that are categorized as necessary are stored on your browser as they are essential for the working of basic functionalities of the website. We also use third-party cookies that help us analyze and understand how you use this website. These cookies will be stored in your browser only with your consent. You also have the option to opt-out of these cookies. But opting out of some of these cookies may affect your browsing experience.
Necessary Always Enabled
Necessary cookies are absolutely essential for the website to function properly. These cookies ensure basic functionalities and security features of the website, anonymously.
Functional
Functional cookies help to perform certain functionalities like sharing the content of the website on social media platforms, collect feedbacks, and other third-party features.
Performance
Performance cookies are used to understand and analyze the key performance indexes of the website which helps in delivering a better user experience for the visitors.
Analytics
Analytical cookies are used to understand how visitors interact with the website. These cookies help provide information on metrics the number of visitors, bounce rate, traffic source, etc.
Advertisement
Advertisement cookies are used to provide visitors with relevant ads and marketing campaigns. These cookies track visitors across websites and collect information to provide customized ads.
Others
Other uncategorized cookies are those that are being analyzed and have not been classified into a category as yet.
SAVE & ACCEPT
5 shares