Today we have another exciting case study to share with you all centered around “images” and just how much impact testing images can have on your lead generation and sales conversions.
In conversion rate optimization there are no elements that are off limits.  Even the smallest change can have a huge impact on your results.
Recently we posted a case study regarding the removal of clutter and leading your visitors down one specific path to the end goal which resulted in a 37% increase in demo leads on a particular client campaign.  You can read that case study here.
This particular case study is the continuation of that previous post where we wanted to see if we could bring the conversion rate up even further.
So just how much do images impact your results?  We find that they hold a TON of weight.  You can swap out a simple image that could boost your results anywhere from 30% to as high as 153%.
Images are a great way to showcase your product or service.  They can add an element of trust, proof, and ease of use.
In this case the product is very visual in nature and what better way to showcase the product than through images.  So we set out to test several images to see the impact they had and the results are pretty shocking!
We took the winning variation from the previous experiment and made that our new control.  It was a very clean page as you can see on the previous case study.  There were no real images.
In this test we added 3 different images to the page as 3 separate variations. (Some information is blocked out to respect some privacy)

Version B (This is labeled as technology) 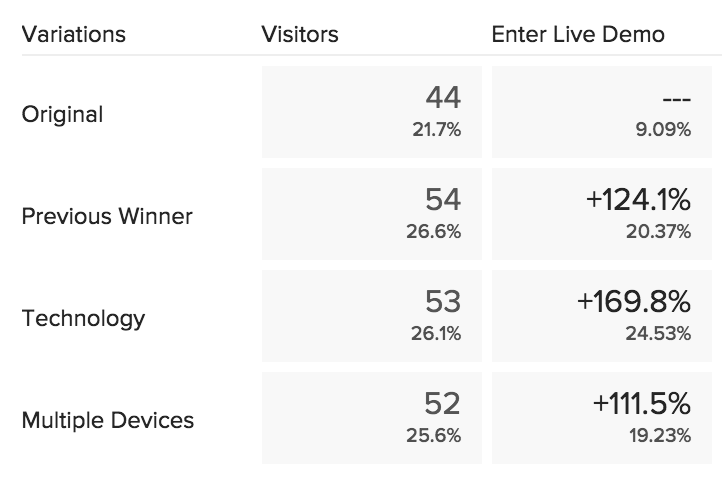 As high as 169.8% in the beginning of the test but as you can see we had a small sample size and it was too early to declare a true winner and we often find that the numbers settle in a bit lower.  It was a good sign that we were onto something when we show increases like this early in a test.
We let it run for a bit longer and came up with these results. 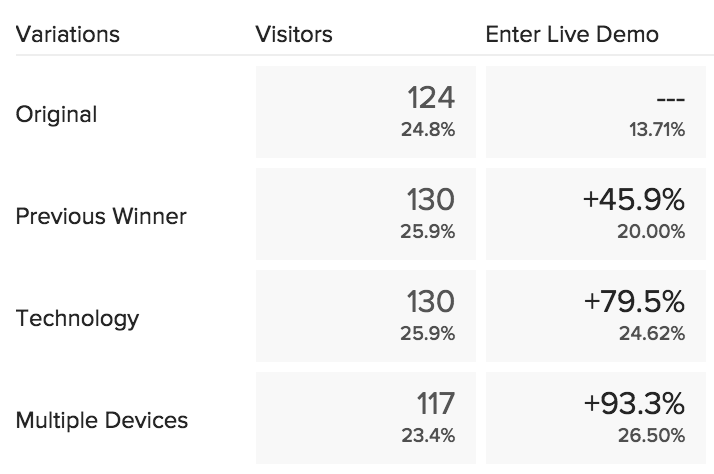 After more than 110 visitors to each of the variations the numbers have settled in a bit more show still some massive improvements.
With version C, multiple devices, image showing the most improvement with 93.3% increase over the control.  Meaning the control without an image converted at 13.7% and the leading variation converting at 26.5%.
Just shy of doubling the conversion rate by just changing a simple image.
Now to be fully transparent, we are currently still running this test and will likely be called as a winner in a few more days.
As you can see testing images has shown to have a dramatic impact on this particular campaign.  We want you to think about what images you can test on your landing pages, the results may just surprise you.
If you have questions feel free to reach out to us as we are happy to help.
Be sure to like, comment, share and subscribe if you found this information helpful.
If you want help with your digital marketing efforts, test faster, get a bigger bang for the buck, be sure to reach out to schedule your no obligation conversion acceleration session.
That’s all we have for today.  Get out there and start testing some images.